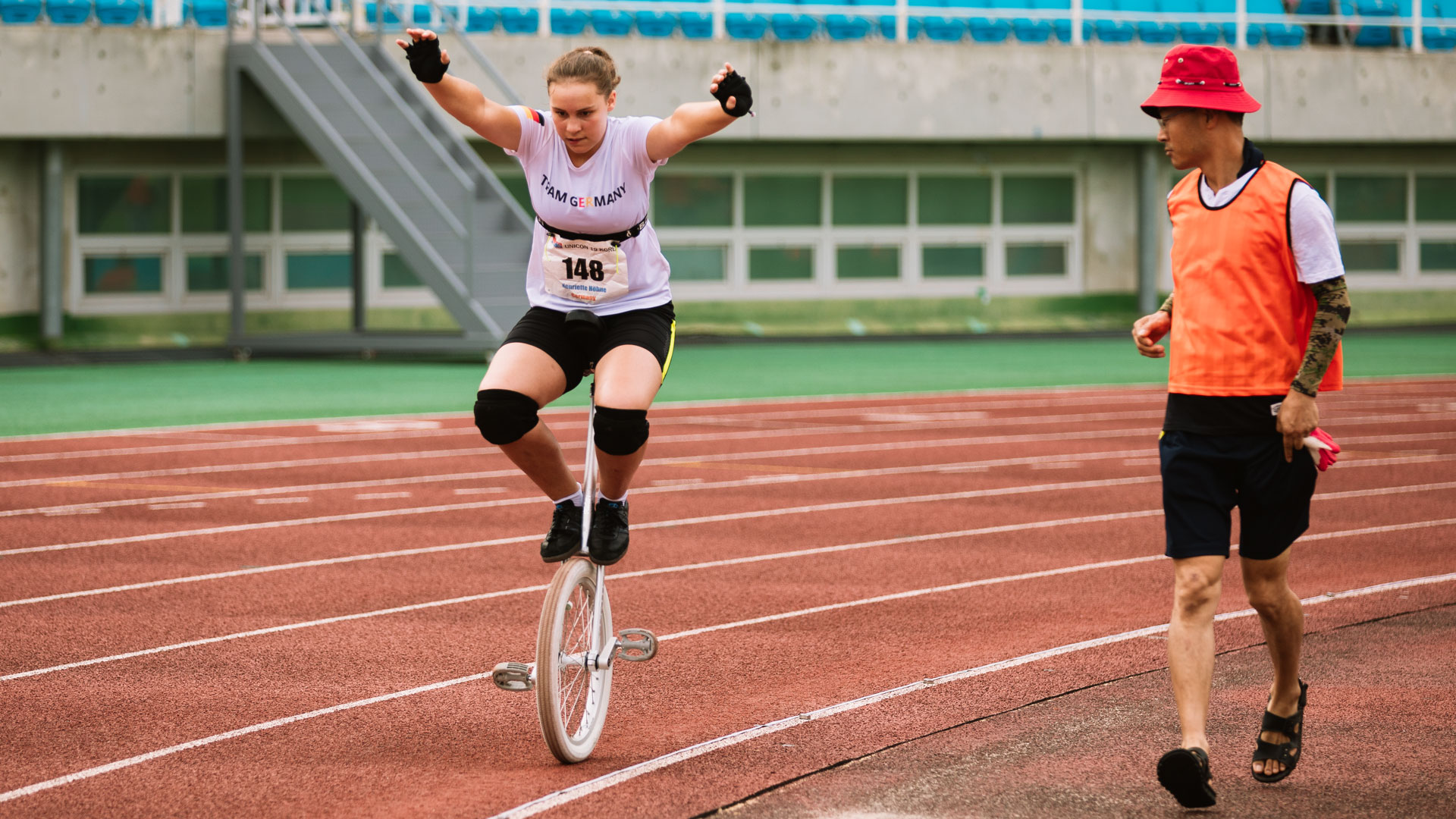 4th of August – Jette is 3rd in Coasting Expert

Meeting at 6.15 am in the hall of the hotel – that had been agreed on, to be at the Wa~Stadium in time for the races of 50m One Foot and Coasting, which began at 7 am. And our disciplined little group did stand ready for departure in the always tropically hot hall before the rooms at exactly quarter past six. That worked just perfectly.

The humidity had increased in the last two days again. A thick layer of mist lies over the city. The sky is grey even with only few clouds.

The first glance into the stadium was to the IUF parcour and its height of water. It was the same as the day before – the Korean hosts were either not able to learn or not willing to support us in the slightest.

The disciplines not affected by dampness started nearly on time, in the IUF-Slalom parcour, mopping and wringing was on the schedule again.

Michael was first in the second heat of the day and won the 50m One Foot, too, with 14.851 s. Unfortunately, Belinda couldn’t finish her run. Henriette was second in U15 with a new personal best. Considerable 8.635 s are in the results.

In Coasting, she managed 120 metres. She had never managed to get this far in a competition before. That’s the third place in Expert Female and the first place in U15.

Meanwhile, there are also results for IUF-Slalom: Henriette is second in U15, Michael fourth in 50+.

Today was decided, that world-record-times, which were achieved here in Ansan, wouldn’t be acknowledged officially. The timing system doesn’t provide the necessary precision to be able to rely on those times.

Michael had his 800m-race at 5pm today. At the beginning there, too, seemed to be a problem with the timing, as all Age Groups had been analysed, except for 50+. But by now, they seem to have found fitting times for the men somewhere in the system.

Additionally, he carried a whole to-do-list with him, which medals he still had to collect at the info-point after his heat. Henriette had three awards today again where she couldn’t be present, because of other competitions taking place at the same time. That isn’t only unfair for the athletes who can’t be there, but also unintentionally impolite to the other athletes, when there are places unoccupied on the podium. At the awards for Coasting and One Foot in U15, all three places were unoccupied today, as all of the girls were at the Wa-Dong-Gym for the Large Groups. That one misses an award for being World Champion, is even more irritating.

The competitions in Large Group began at 4pm. Because of the 800m, Trial and a whole lot of awards at the same time, the gym was only half full. That was different at other UNICONs before.

The Fire-Small Group and the United Bavarian Freestyle-Large Group stayed without medals, unfortunately. In both cases, Japanese performances with much tempo and fascinating precision, but without a far ranging variety of tricks, won. Those views of performance are so different as in Figure Skating the sports-pairs and the Ice-Dancing-pairs and should be, as those are, judged apart, if both are to be judged rightly. Of course it is very difficult to get a right ranking from such differing performances, even if they give a variety to Unicycling. So there will always be some disagreements after the performances, as two worlds of freestyle clash here…

In any way it is a pity that a very high trick level doesn’t count for anything in the judging.