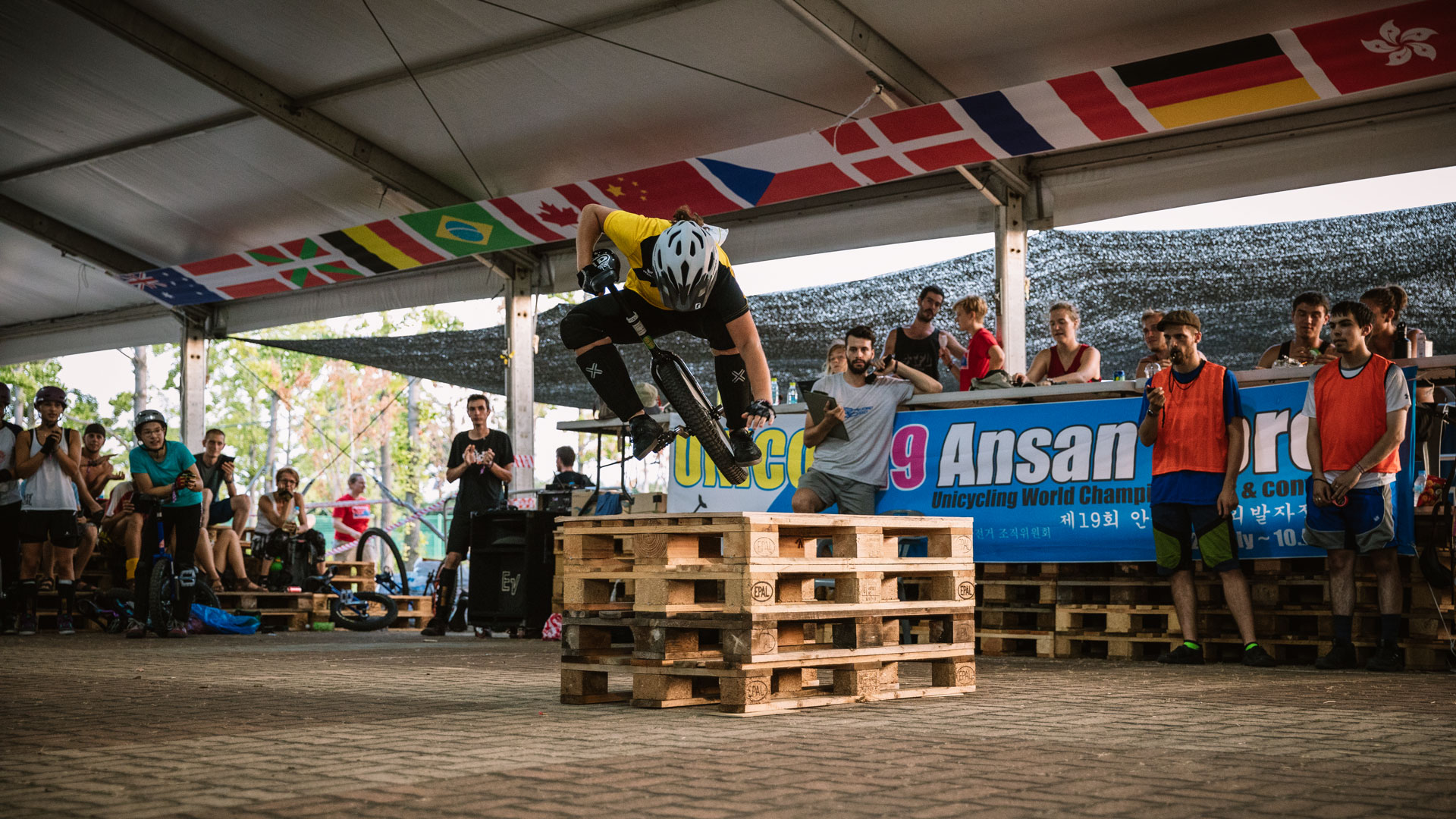 3rd of August – one of the power days during the UNICON with a densely packed schedule of competitions at different facilities. When we arrived at the track in the Wa~ Stadium at 7.30am today, Race Director Miriam Lips had already had her fill. She had asked the Korean stadium-staff to stop the watering of the turf three days before the IUF-Slalom many times for weeks. Last night, too, she had been talking about that with responsible people. This morning, though, the water was many centimetres both on the training and on the competition parcour and the watering vehicle went on driving around the turf merrily. All effort had been for nothing. For an hour, we tried to dry the biggest waters with cloths. We are lucky it’s hot here in Ansan. So the heat could at least do a good deed and draw the last dampness out of the Tartan. But the first hour was lost for the competition and with the multitude of competitors this became a serious temporal problem. Soon, the queue ran once over the whole hot Tartan. Luckily, Henriette profited from the idea of a Danish attendant to let the competitors, who had to get to the freestyle gym for X-Style, complete their IUF-Slalom before the others shortly before noon. Like that, she got nearly to the top of the line and could complete both her two tries relatively quick.

At the same time as the drying, the 100m had been started. Michael rode in the last of the four heats of 50+ and won his Age Group with very fast 16.09 seconds. Of course he had hoped for a medal. The first place came rather unexpected, though. His heat was pleasantly international with riders from the USA, the Netherlands, Great Britain and Japan.

The competitions in the stadium are held in the sun at high temperatures. For the athletes, that’s conditions near the borderline, but for the spectators the otherwise so wonderful atmosphere of track races doesn’t appear, either. You could have sat on the stands before the 100m-Track in the scalding heat. No one did. Both athletes and attendants preferred to go into the stadium merely for the competitions and flee back into the a little cooler inside-rooms of the stadium-catacombs right after. So there was no great feel in the stadium.

At 10am, we hurried to the finals in Speed Trial, in which Jette was. She hadn’t been able to do the IUF-Slalom, which was why we had been at the stadium so early, yet. Unfortunately, she slid off her pedal in her first duel, and the dream of achieving a better result in this final was over.

We quickly went over to the stadium again and back into the never ending queue of people waiting to compete at the Slalom. Thanks to the above stated idea, that competition could be completed before the X-Style. After that to the freestyle gym, where the X-Style-competition started at 12 o’clock with the riders meeting. As the finals in High Jump on Platform were to start at 5pm and there was a delay in the gym – so that Junior Expert hadn’t started yet – , we were pretty stressed there four hours later. At least, she was allowed to show her performance shortly after half past four as the first of the candidates. It worked perfectly. Alas, we couldn’t see the other girls anymore, so that there was no possibility to compare any performances.

Now we raced back to the Social Area, where there were the Finals in High Jump on Platform to be held at 5pm. Jette was 5th in the end. In the Age Group U19 she was 3rd. In between, there was Wheelwalk, where only Belinda reached the finish line, as, unfortunately, Jette and Micha dismounted.

We missed the awards in X-Style in the Wa-Dong-Gym. They were supposed to start at 8pm – we would have managed that – but were held much earlier, when Henriette was still jumping in the Final. So sadly, she couldn’t collect her Gold Medal for the title of Junior World Champion in X-Style herself.

It’s like that with many awards here. They are held at the same time as other competitions or are being done earlier and therefore aren’t manageable for us. It’s not very nice to have to collect your medal, that you have won at World Championships, at the info point.

At a late hour and after many failed attempts, Michael also managed to get a possibility to start at the IUF-Slalom.

Right now, the schedule of the track races differs considerably from the plan, that was posted at the begin of the UNICON. Because of the spectacular heat, the competitions already begin at 7 am, there is a break from 12 to 5, and at 5 pm the second session of the day begins. Also, the disciplines are exchanged and postponed about the days. The reason for that is the idea of relieving the riders of the burden of the big heat at mid-day. But this new schedule also creates problems, as, like that, often other intended starts are rendered impossible.

Doubts about the timing system are being heard. There is no automatic detection of false-starts. During our short stay in the stadium, we have seen many clear false-starts with the naked eye, that weren’t stopped. The actual time seems to be started manually at the last beep. So, many a result can be doubted. Top-athletes and non-professional technology meet there.