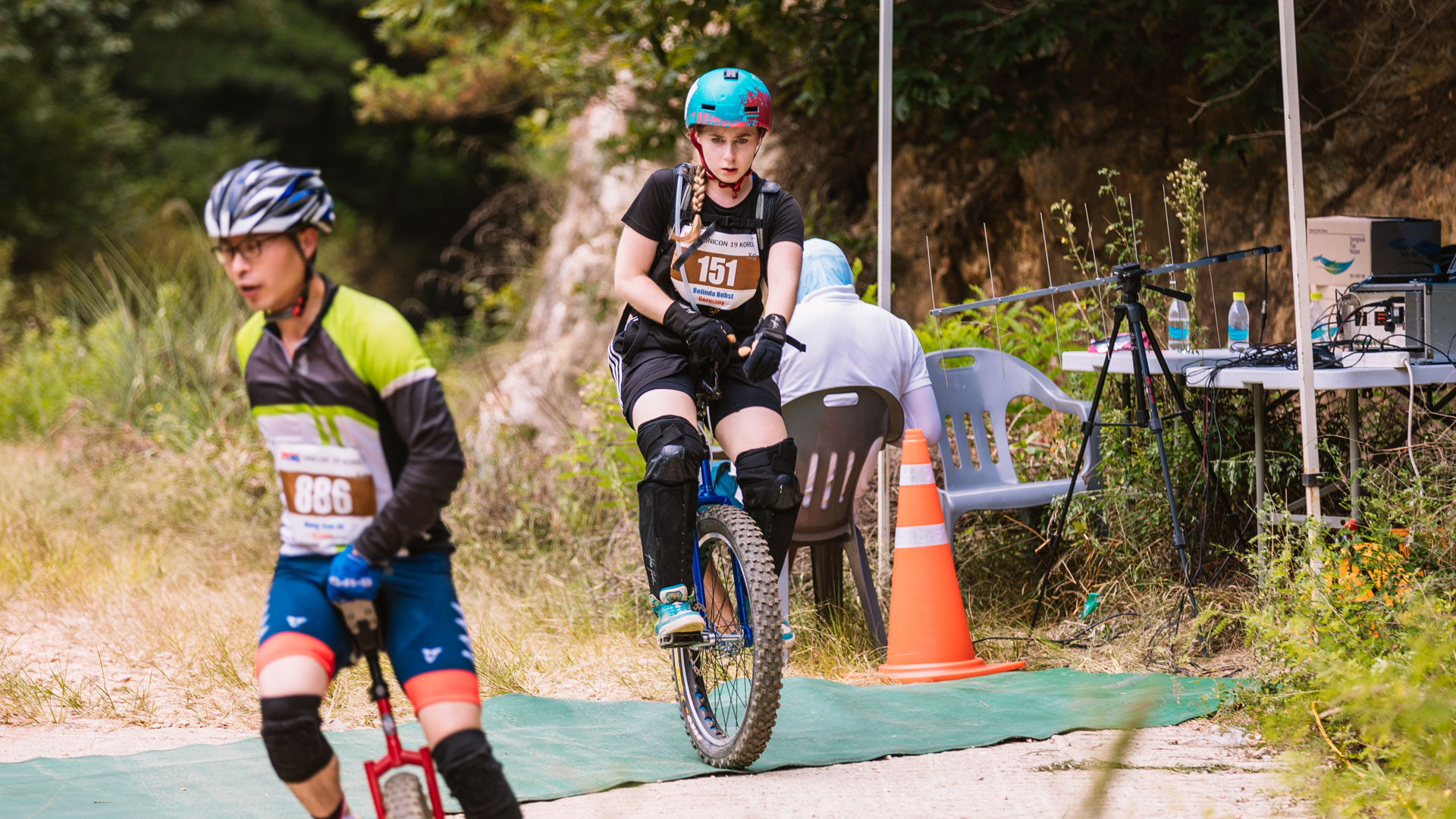 6th of August – XC and Uphill

Today, we experienced a humidity of close to 100 %, a little rain in the morning, but with temperatures like in an oven, and that at the day of Cross Country and Uphill. These were very tiring conditions, and the riders and attendants were very glad to be back in a hotel room with 24 degrees and a relatively normal amount of water in the air after nine hours of extreme physical strain in this greenhouse.

About 15km north-east of Ansan at Mount Suri, a Mountain, popular with mountain bikers, with a height of about 500 metres, those two outdoor-competitions were held.

The day started at 9 am with the five waves of XC-Elite. That one ran over 5 laps of 5 km each, in the beginning about 1,000 metres on a village road, then up a long rise on paved road, later passing into gravel and little, sandy hiking tracks. Up- and downhills took turns, there were hardly any level parts, abilities for both kinds of paths were needed in quick exchange. The finish was located right after a downhill-passage.

Konstantin rode in wave one, Michael started his competition in wave five. Afterwards, Konstantin wasn’t content with his choice of unicycle. The video you could see beforehand seemed to show a path that could easily be managed with a geared 26 inch. But the track was different still and had been turned around in the direction of passing shortly before the competition, and so his material was more of a disadvantage than the opposite. After he had noticed his problem, he finished his 15 km, to be sure, but reduced his speed and saved his strength for the marathon on the next day. Michael began the first lap rather cautious, so as to get an overview over the difficulties of the trail, tested in lap two, which passages could be managed faster, and speeded in lap three as fast as heart and lungs could manage. Belinda competed in XC-Beginner over 5 km at 11.30am and used all her strengths, too.

Caused by the profile of the trail and the very tiring climatic conditions, the exhaustion was great afterwards. The start lists had gotten shorter already beforehand, as many a competitor signed off for the XC. The combination of 15 km and a sub-tropical weather was the reason for many riders to either cancel completely or change to the Beginner-XC. There were cancellings from people who started at many disciplines, too. So Henriette signed off from the XC,  as the schedule of the last days had taken many parts of her strengths. She didn’t want to change to Beginners under any circumstances. There, all who hardly ever train for Municycling, should get their chance to achieve a medal rank.

In the afternoon, there were many who didn’t compete in Uphill. But Jette, Konstantin, Michael and Belinda bravely rode up the very long and tiring hill.  At that, the stony passages were judged difficult most of all. On 690 metres of lenght, 80 meters of height were to be passed. At the finish, Michael reported that he had to stop at some places to take seemingly 50 breaths in 15 seconds and get the pulse rate under 180 again. It hadn’t happened to him often in Uphills, that he had to rest standing beside the unicycle.