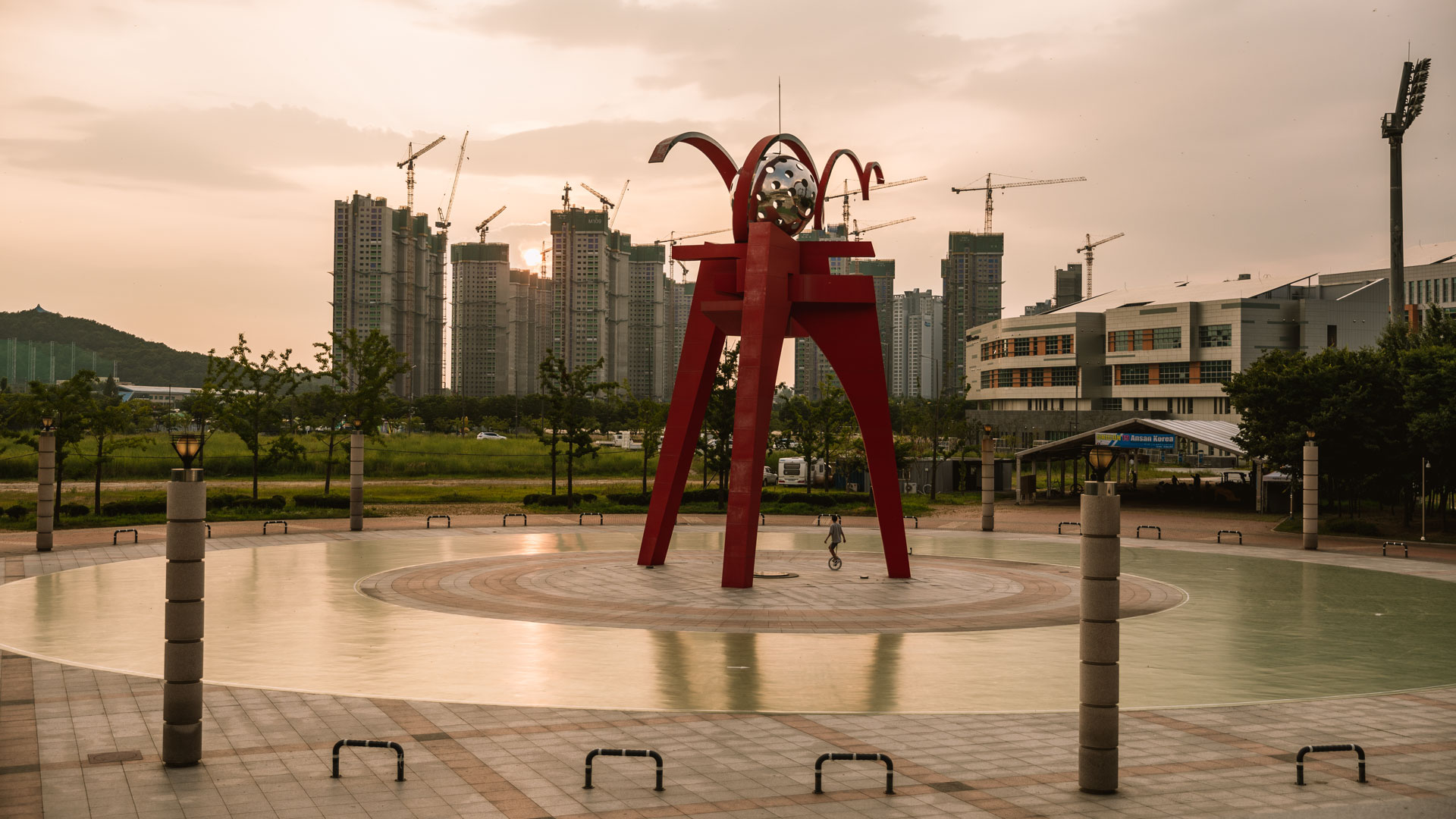 Taking the first step out of the air-conditioned airport – wow, our breath is caught in our throats. WHAT A CLIMATE! That hot and a that high humidity at once – in our climes you can only find such weather in the tropic house of a zoo or in a very warm indoor pool. Torrents of water run down our faces, even standing still. Of course we knew of these difficult climatic conditions, theoretically, but it is completely different seeing it for yourself. Additionally, there is a big thunderstorm area here today, what makes the weather of a steam-kitchen even more intensive. Somehow we will have to get used to that sauna quickly, are there athletic top achievements to be made. The view down from the hotel window is fittingly dark and misty, nothing nice to look upon. Grey tower-blocks and half-ready building sites beneath dark thunderclouds.
With a little “Tetris-skill” we stowed 10 big suitcases, the two opulent bike-bags and several little pieces of luggage in our renting-car, a not-anymore-so-white Kia Karnival. However, there was only room for three people after that: the driver himself, who still had room that was acceptable, and the two passengers, who to had to tuck up their legs tightly, though, like astronauts in the tiny take-off-capsule of a Sojus Rocket. That had been obvious, as all the collected baggage had just fit in the VW-Bus with efforts.

So Konstantin and Belinda made off to the adventure of getting to Ansan by public transit. At that, they encountered the same two problems that we did: near to no one can speak English, and weather or not a credit card is accepted is mere chance. We had been aware of the first, informed by travelogues and adventure stories about Korea Republic. That we would have problems with paying with credit card, though, was a surprise to us. You could read more of the opposite, and even our bank was sure that we would not have any problems with paying without cash and that carrying cash with us would not be necessary.
And so we depended on the mercy of the cashiers, who let us through even without payment for now…

Our hotel has an English name. It is called Royal Heritage, but no one can help us with English here, either. But that would have been very much necessary, as at fist the German bookings weren’t found, then only one room was booked and suddenly the time of the stay wasn’t correct any longer, either. We were already thinking of throwing ourselves to the ground and kicking with hands and feet as our last option, when – thanks to Google Translate on the mobile – there came a change into the negotiation after all and we now inhabit the right rooms in the right size and with the right time of stay.

Now, we already have been looking around our nearer area, know, which bank gives us (after all now) cash, even with our foreign cards, where there is mineral water to be had and which fast food restaurants will feed us in the short time of our following days. We have seen rows of parking cars with their motors running merrily while their owners sat comfortable in one of the surrounding restaurants. Like that, every climatic zone has its own singularities: In Siberia, they let the motors run in the winter, so that the vehicles won’t freeze, in Korea Republic, they do the same in summer, so that the cars won’t burn out inside.
The auto fumes refine the wild chaos of smells, that wafts through the streets of the about 700,000 inhabitants counting city anyway, by another nuance then.

At the Wa~ Stadium, headquarter of the UNICON 19, we encountered Lasse Jensen from Denmark in the evening, who organizes the freestyle competitions. That was an opportunity for Konstantin to talk about the conditions of the intended live stream of the Expert performances. Doesn’t look that bad so far…