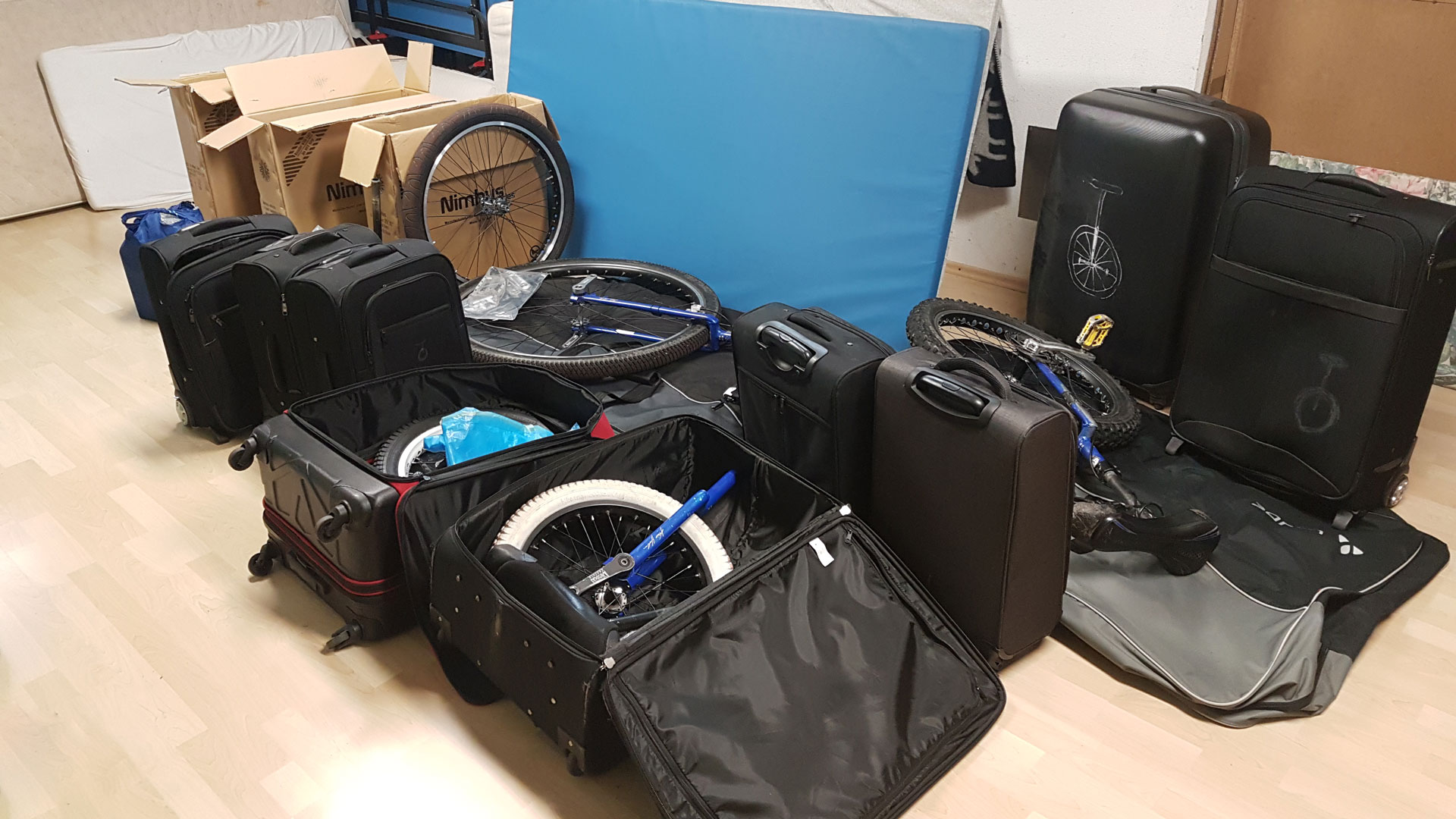 Close to the departure

Only four days left until we fly to Seoul.

The first start lists can already be found on the UNICON-Website. Every day, more information and inquiries of the individual Directors arrive. Through those, facts are being compared, changes recorded, that were made after the end of the sign-up, and news about the disciplines spreaded. So far, all that gives a good impression. As far as I can remember, there wasn’t as much communication as that two years ago.

In the basement, we are working on finding the most intelligent solution to stow all the material for the flight, right now. We came to the conclusion to take 15 unicycles with us, additionally protectors, helmets, a tire pump, spare tubes, a Wheelwalk-Saddle, tools, Freestyle-Costumes, a whole lot of active clothing, multiple pairs of trainers and much more… To make sure that the airline staff won’t despair when we will come with multiple trolleys on Friday, we will already check in our big suitcases, transport cases and sport luggage on the day before the departure. Exciting. The next time when things will get exciting again, will be when we will be standing nervously before the baggage conveyor belt in Seoul and will be hoping for our 12 pieces of luggage to have found their way to the Incheon International Airport. After all, a UNICON without unicycles or with just a part of the equipment would be, somehow, stupid.

The airport in Seoul belongs, like Munich, to the best in the world. In 2018’s study it was second (Munich 6th). Belonging to the Four Asian Tigers, Korea Republic developed to be one of the most important national economies in the world since the sixties. It is world-leading in some branches of technology. 2017, it had the fastest internet in the world, also the most broadband connections per inhabitant. Based on that, we can hope that there will be a good communication during the UNICON. 51,700,000 people live there, nearly a fifth of that in Seoul. The currency is Won. For one Euro you get about 1,330 Won at the time. From Germany to Korea Republic, you need a little more than 10 hours by plane and fly through 7 time zones. We will be landing in Seoul at 9:40 am on Saturday, and at that time everyone will still be sleeping back at home. The form of government is Republic. After the spectacular meeting of North- and South Korea, surely many people all around the globe know the name of the head of state, Moon. In the East, Korea Republic meets the Japanese and in the West the Yellow Sea, the South is encircled by the Korea Strait. The coast is 2,413 km long. The border-village Panmunjeom has a special status. There are UN-Barracks, in which there sometimes are negotiations between North- and South Korea. The border runs through the barracks and right over the negotiation table, so that none of the representatives of both parties has to leave their country. When there are no negotiations, tourists can visit the barracks. The national dish is Kimchi. A Korean eats 22 kilos of that a year. The hot-spiced vegetable is a given part of every meal. Top atlethes are forbidden to eat Kimchi during important championchips, though. The hot spices decrease athletic capabilities. On an average, South Korean men are 8cm taller than their North Korean  neighbours. The stated reason for that is the well better nourishment in the South.

Well, we are curious what other interesting and remarkable things will cross our path in KOREA REPUBLIC!